Where to see the Shoebill Stork? 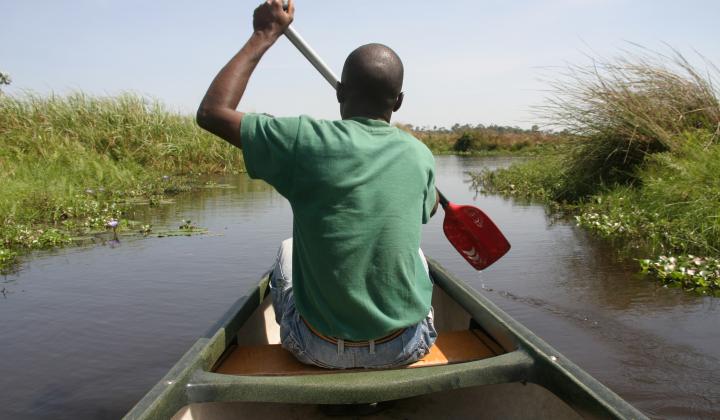 The shoebill stork (Balaeniceps rex) is one of the great bird species in Africa and certainly one of the major challenges in bird watching.

The shoebill gained the name of “the most sought-after” of all the birds of the African continent. You don’t need to be a bird watcher or an ornithologist to get excited when you see it. The bird is so impressive and without doubt the most extraordinary bird to discover in Uganda!

As its name suggests his bill is quite big (30 cm x 10 cm) with the structure of a human foot that ends in a ferocious nail-like hook. Long in the leg and broad in the wing, standing well over a meter twenty high and dressed in blue-grey. With his yellow eyes the bird has also a violent appearance.

Do you know that the shoebill stork can live up to 36 years? Shoebills prefer swamps and in particular vegetation formed but not exclusively, by papyrus.

Shoebills generally keep to the more open areas, to avert problems with take-off that pure papyrus and tall grass would cause.

Uganda has 17 % of its surface covered by fresh water lakes, rivers and swamps and it's probably for this reason that Uganda is one of the best places to see the stork.

The areas around the River Nile and Lake Albert are usually indicated as popular sites to spot the shoebill. Philip Brigs tells in the Uganda, Bradt Travel Guide, that (Murchison Falls NP): "the Lake Albert delta is favoured by bird watchers as offering perhaps the best opportunity to see shoebills anywhere in Africa."

It might be the best place to see the shoebill when travelling to Murchison Falls, it’s not the only site where the shoebill has been recorded.

Our experience tells that you don’t need to travel that far to see the shoebill. We advise you to spot the bird in Mabamba wetlands, about 45 km from Kampala in Mpigi district.

On the shores of Lake Victoria you have a fascinating wetland where we take our clients with our canoe (Canadian type). This is a very important tool when you know that shoebills live in areas which are generally difficult of access. Not everybody is that lucky but some clients have seen the bird three or four times on the same excursion. Our average success rate is now more than 70 %.

We are getting more experienced and the local community is organised and protects the swamp. They have some income now from visitors.

Our local guide, Kasasa Hannington, a major key player in the protection of this Important Bird Area (IBA), told us that there are four shoebills left in Mabamba and that he's claiming back "his" two other shoebills from the Authorities!

Mabamba Wetlands is available as a half-day trip. Simply a must for every bird watcher or an exciting excursion if you want to discover how a swamp is alike. Good photo opportunities!

In the same area as Mabamba on Lake Victoria there is also Makanaga Bay.
Not as popular as the here above Mabamba Swamp thus less travelled by birders, the place is less disturbed and more favourable for birds, especially the very shy Shoebill.
There is also less human activity like fishing on the site, meaning more food for Mr. Shoebill and other fish-eating birds.

To get to Makanaga Bay Swamp from Kampala, you take Masaka Road for about 1 hour and turn on left to Kamengo trading centre (Mpigi) then branch on left again towards the lake. You need around 20 minutes to reach to Namugobo Landing Site from where you enter in the swamp. Advance arrangements are necessary because by now there is not yet an established association of local guides, here may be another opportunity to use our Canadian canoe.

You can also see the shoebill in very good conditions in Semliki Wildlife Reserve on the shores of the Southern part of Lake Albert. Arrangements are made through the Semliki Safari Lodge. This activity is regarded magnificent by bird lovers as it gives chance not only to view shoebills but also to come across other several species of birds that feed on and around the Lake such as African Pygmy Goose, Blue-breasted and Blue-cheeked Bee-eaters and Blue-headed Coucal, and schools of hippos among others.

After the Southern White Rhinos that call this Sanctuary home, the shoebill stork is one of the most sought by tourists in Ziwa. It is mainly found within the Lugogo Swamp through the canoe ride. Other bird species can be spotted: the African King eagle and the Giant kingfisher among others.

See the Rhino Sancturay Video about the shoebill.

The Lake “Edward Flats” as it is called is a marsh shore on the extreme south end of Lake Edward in Ishasha, the southern sector of Queen Elisabeth NP. This swampy patch on the northern circuit hosting quite a few waterfowl has often provided opportunities to see the shoebill during the game drives.

Along Masaka – Mbarara road, Local guides will help to spot the shoebill in Kyabakuza Swamp and Lwera Swamp. 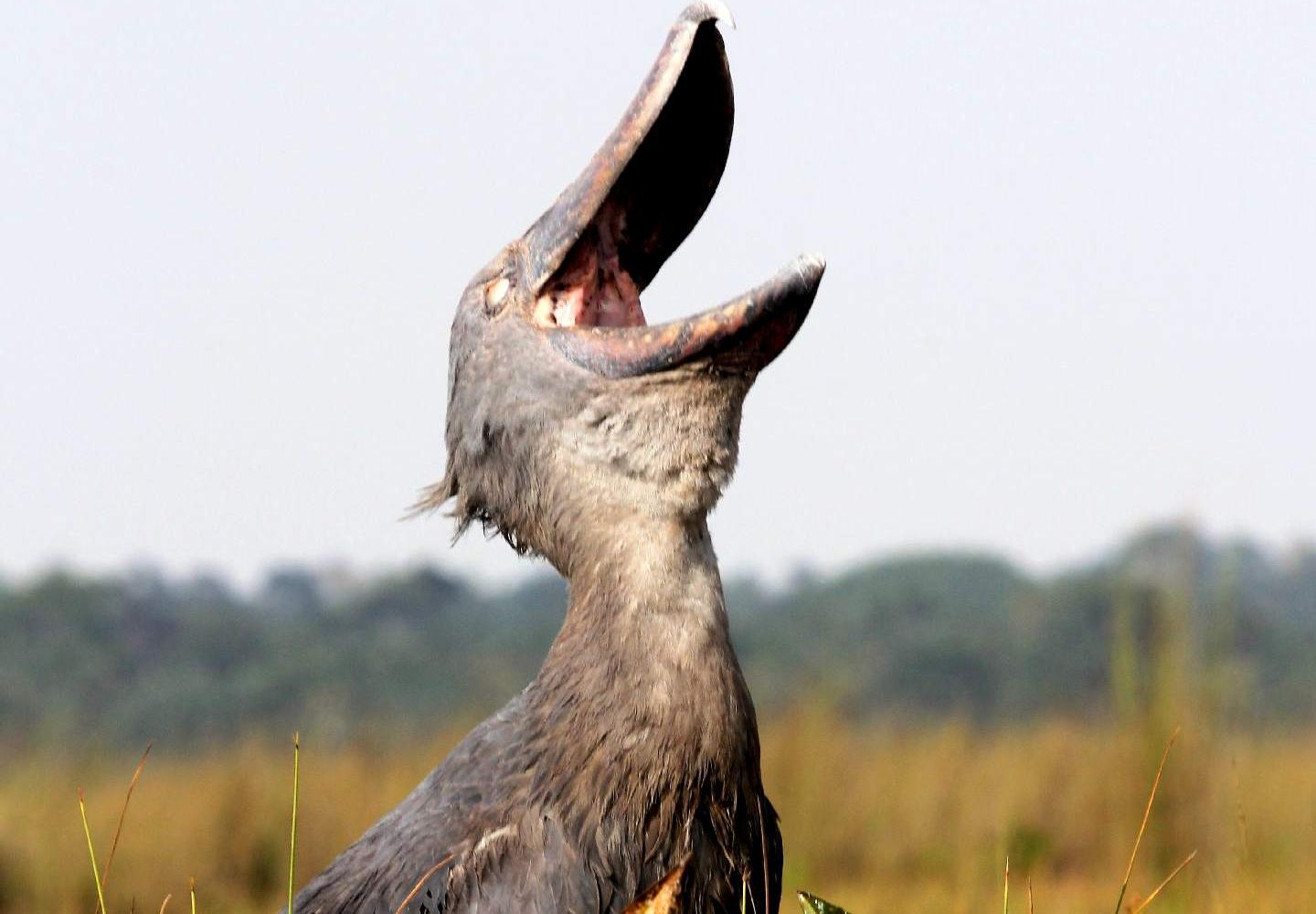 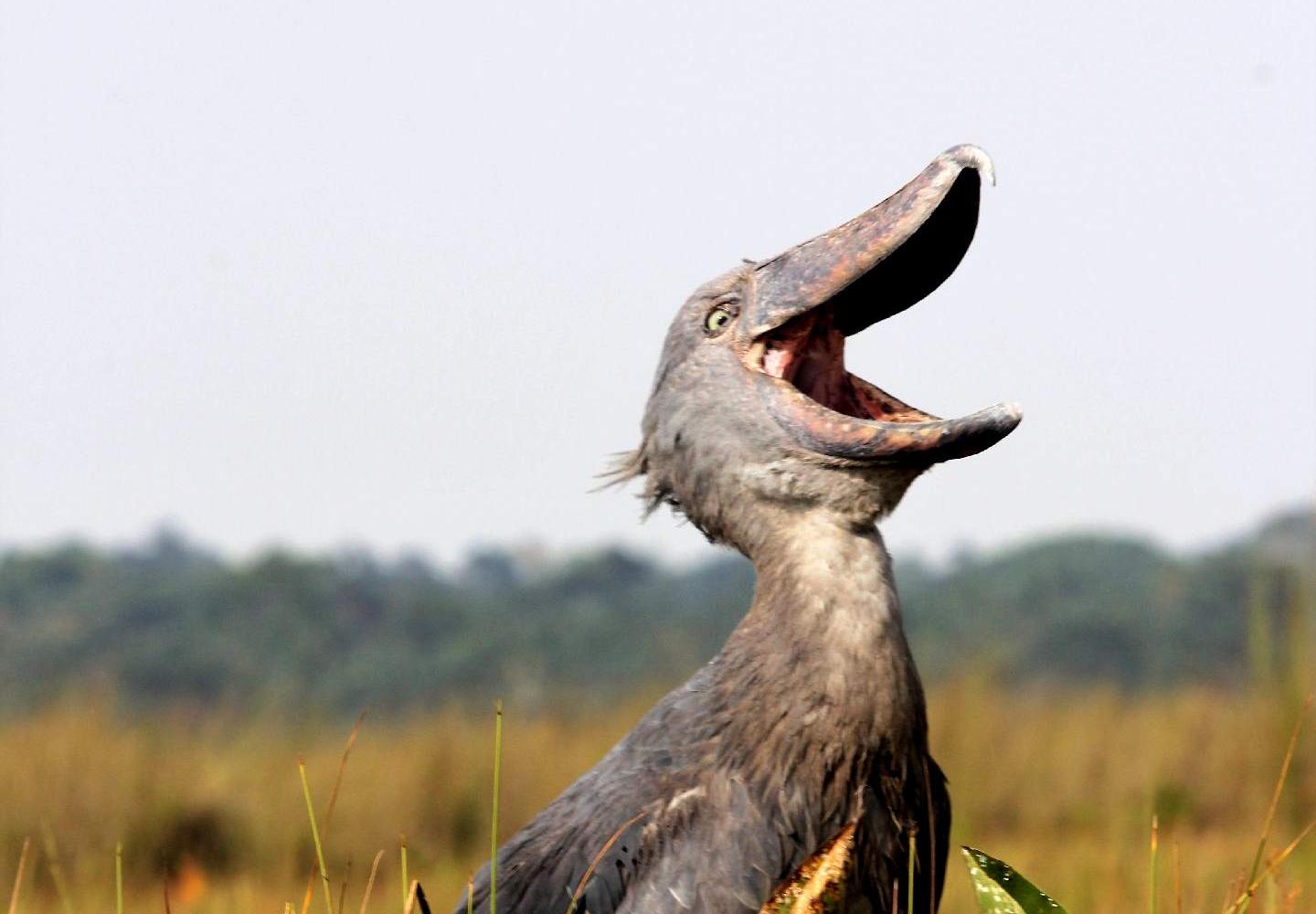 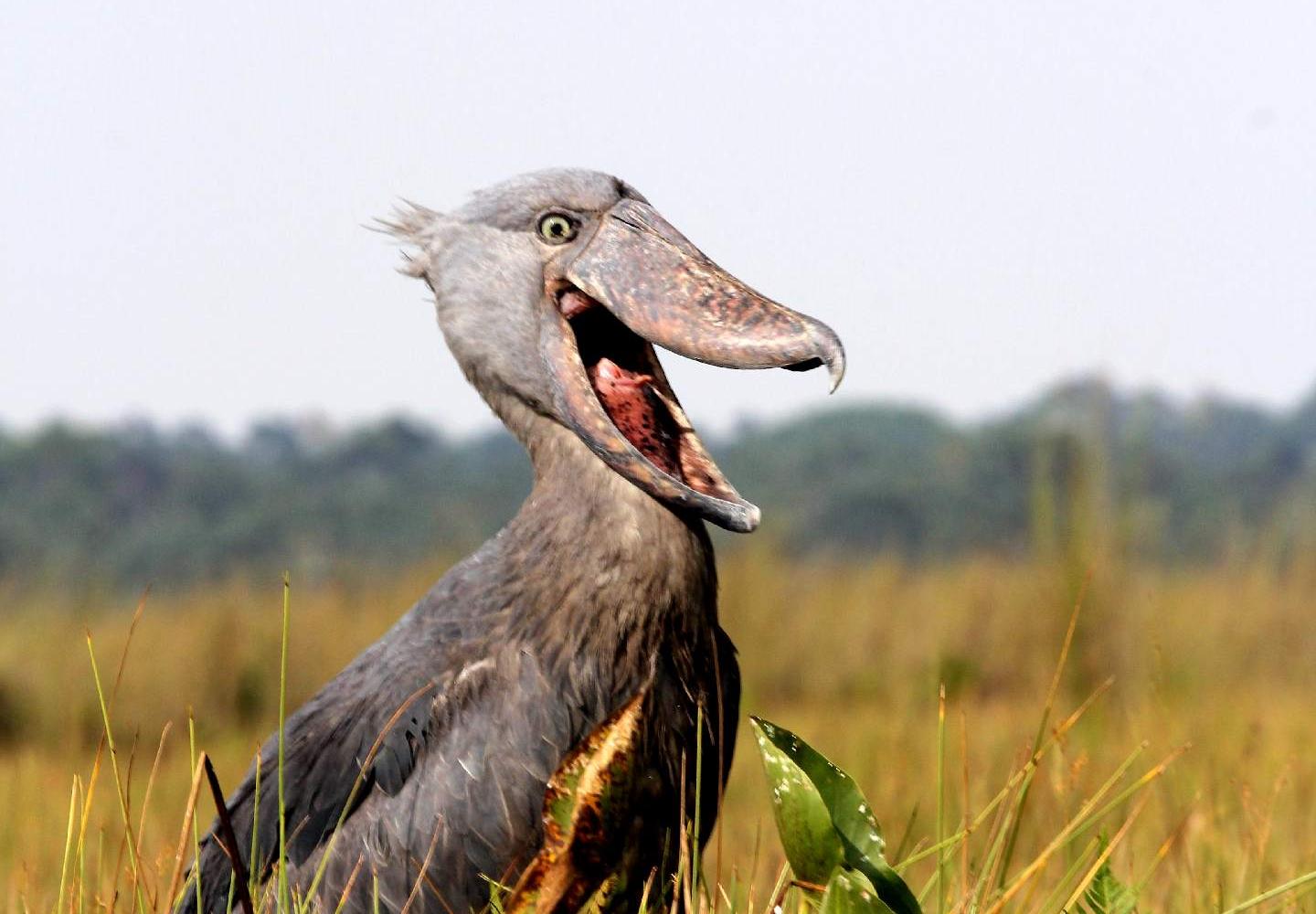 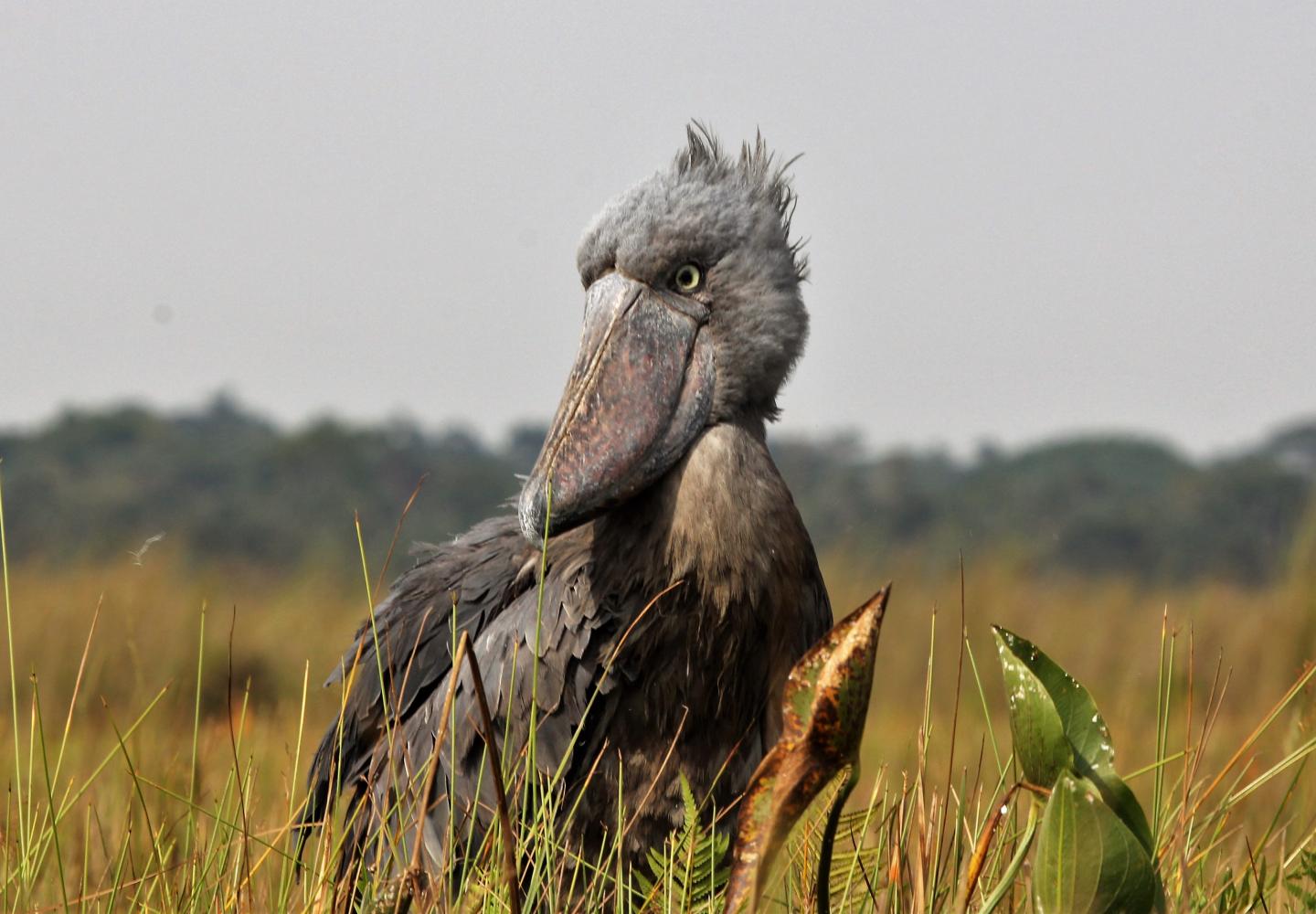