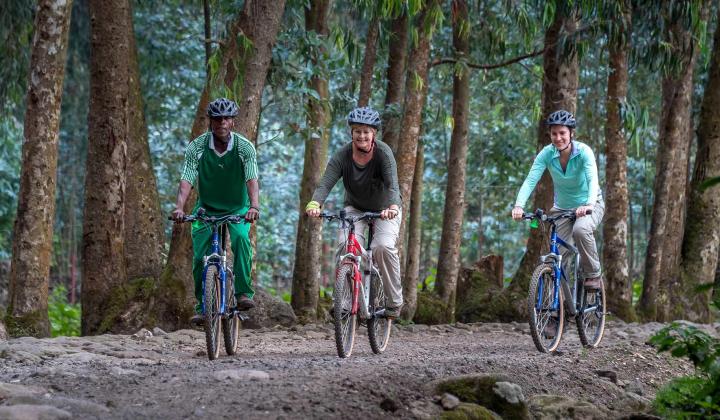 The growth in the tourism sector has over the years largely been linked to tourists visiting the Mountain Gorillas in the Virunga National Park. However, all this is changing as the government through the Rwanda Development Board (RDB) started marketing Rwanda as a unique tourist destination that can be visited all-year round. Considerable efforts have been made in the Hospitality industry and new developments in the Lake Kivu region are becoming increasingly important for Rwanda.

- Mantis has also opened in 2018 a new Luxury hotel outside the park near the northern entrance of Akagera National Park (Nyagatare): Mantis Epic Hotel & Suites.

Gishwati-Mukura National Park: In 2019 Rwanda Development board made an agreement with Wilderness Safaris to develop the activities in the Park. Gishwati Lodge is a project of Wilderness Safaris and it will be organized as a rustic adventure camp with 6 forest cottages.

- Mantis has also a new project for 2021 and will organize cruises on Lake Kivu with the Kivu Queen Uburanga, which will be the first floating luxury hotel in Rwanda.

- Congo Nile Trail: This is an itinerary created by Rwanda Development Board starting in Rubavu and ending in Rusizi, the journey takes about five days by bicycle and ten days on foot, although it is possible to do single stages. A fantastic immersion into local life and scenery, the Congo Nile Trail is a 227km itinerary which runs roughly parallel to the eastern shore of Lake Kivu.

Nyungwe National Park:  Canopy walkaway and the opening of the Luxury Nyungwe House***** by One and Only. In Ruzizi (Cyangugu) region, we note the opening of Mantis Kivu Marina Bay Hotel**** which is certainly an asset for Nyungwe NP.

The campus is the new home for the Karisoke Research Centre and aims to inspire tourists, scientists, government partners, students and community members toward a lifetime of gorilla conservation.