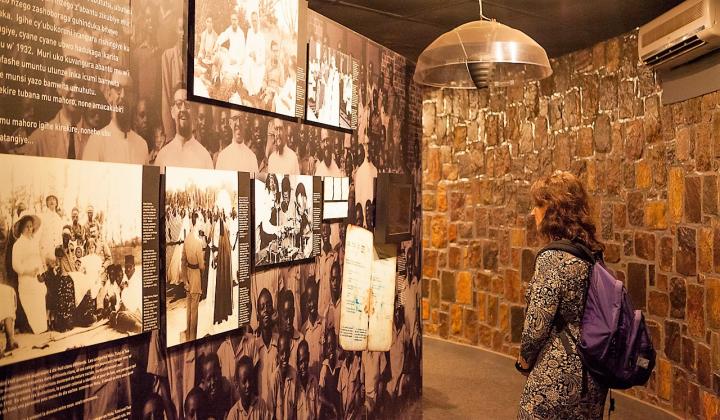 It contains a permanent exhibition of the Rwandan genocide against the Tutsi and an exhibition of other genocides around the world.

The Centre includes three permanent exhibitions, the largest of which documents the Rwandan genocide against the Tutsi in 1994. There is also a children’s memorial, and an exhibition on the history of genocidal violence around the world. The Education Centre, Memorial Gardens and National Documentation Centre of the Genocide all contribute to a meaningful tribute to those who perished, and form a powerful educational tool for the next generation.

The Kigali Memorial Centre is an International centre that deals with a topic of International importance, with far-reaching significance, and is designed to engage and challenge an international visitor base. The response from genocide survivors to the creation of the Centre was unpredicted. In the first week, over 1,500 survivors visited each day. In the first three months of the Centre's opening, around 60,000 people from a variety of backgrounds visited it. Over 7,000 of these visitors were from the International Community.

At the onset of Genocide, ten Belgian UN Blue Beret were deployed to guard the Prime Minister. Presidential Guard soldiers invaded the home, disarmed the Belgians and transported them to Camp Kigali where they killed them. There are ten pillars at this site to commemorate these soldiers, an eleventh one inside in memory of all the victims. The Prime Minister was also killed.

Murambi Memorial Centre: A school where 27,000 people were killed. A stark, shocking monument, hundreds of corpses are temporarily preserved and currently displayed in the school. The memorial has been developed as a permanent exhibition to the genocide against the Tutsi. It documents from pre-colonial times to the more recent history of the 1994 Rwandan Genocide against the Tutsi. The design focuses on developing a memorial from which the school children and local community can benefit. With the construction of the centre at Murambi, through smoked glass, bodies can be viewed that have been buried in burial chambers. An open hall with an exhibition describing the context of the genocide. The bodies are currently being displayed in classrooms

Nyamata Memorial Site: Nyamata is located in the outskirts of Nyamata town in the eastern province. This site is a church where around 2,500 people were killed and it had become emblematic of the barbaric treatment of women during the genocide. In the church at Nyamata, there will be graphic and audio-visual displays that will focus particularly on the mass rape, brutalisation of women and the use of HIV as a deliberate weapon of genocide

Ntarama Memorial Site: Ntarama is a church site in the rural Kigali Province, situated not far from Nyamata in an area known as Bugesera. Converted into a genocide memorial in April of 1995, Ntarama Memorial is one of the longest serving memorial sites in Rwanda. For decades, there had been forced population movements and frequent massacres. About an hour’s drive southwards from Rwanda’s capital city, Kigali, the red-brick church at Ntarama is peacefully situated, shadowed by acacia trees. Ntarama Church, however, is the site where some of the most brutal killings of the 1994 Rwandan genocide against the Tutsi took place. The church at Ntarama was seen as a safe place by almost 5000 people, many of whom were women and children and who went there for sanctuary. But Ntarama was not a safe place. The victims of the genocide remain there, their bones were placed in coffins and into the mass grave on the former church premises. Inside the former catholic church is buried a widow who was violently assaulted because of her ethnicity. Their belongings are arranged in the church remains; clothes, suitcases, beads, necklaces, children’s books and drawings - the last remnants of a desperate flight for life.

Bisesero Memorial Site: Bisesero is set in the hills of the Karongi (Kibuye) province of West Rwanda where some 30,000 people were killed. The region around Bisesero has become known for the acts of resistance from Tutsis who tried to organise themselves against the massacre. This was mostly unsuccessful as they were fighting with sticks against well-armed and trained soldiers.

Nyanza Memorial Site: At the start of the genocide against the Tutsi in April 1994, over 2,000 Tutsis took refuge in ETO school on the outskirts of Kigali, protected by the United Nations Peace Keeping force. Following the withdrawal of the UN, refugees were marched up the road to Nyanza where they were all butchered. Marked by simple wooden crosses, a symbolic of the abandonment of Rwanda by the International Community, this site is being modified as one of the major memorials. Each year on April 11th, a memorial ceremony takes place on the site where the deserted refugees were murdered in cold blood.

Nyarubuye Memorial Site: A convent and school where 20,000 people were killed. These people had been trying to escape over the border to Tanzania. During 2003, the school became functional again; the convent, however, remains empty, apart from the bones of the victims, and will be turned into a memorial and education centre.

The only man I envy is the man who has not yet been to Africa - for he has so much to look forward to
Richard Mullin
This website uses cookies to ensure you get the best experience on our website.
By clicking anywhere on our website you will accept our cookie policy.
More info