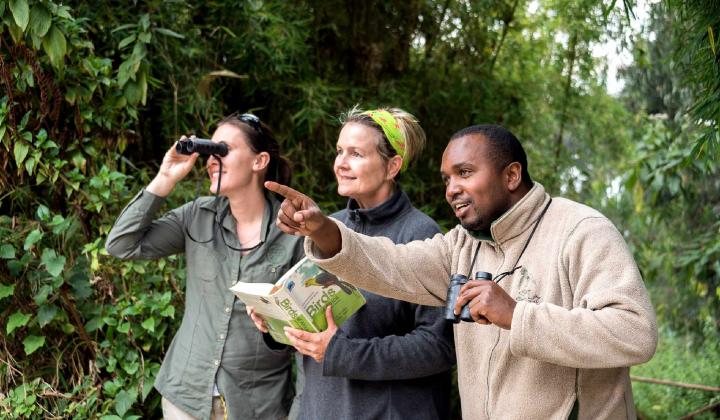 Rwanda, a birder’s heaven with 703 species, 29 Albertine Rift Endemics, diverse habitats and the best montane birding in Africa.
Rwanda offers arguably the best African Montane Birding anywhere. Combine that with a great road network, safety and security, a diversity of habitats and you have one of the best eco-tourism destinations in Africa. The compact nature of the country means that several birding sites can be visited in a relatively short trip, giving access to some of the most desirable species in Africa.

In total 703 bird species are known from Rwanda (November 2018) and surprises are always possible with several species added to the country list since 2010. Among the resident species are 29 Albertine Rift Endemics and several Lake Victoria Basin Endemics, which should be on any birder’s wish list.

Most birders will want to focus their attention on Nyungwe National Park in the west of Rwanda and Akagera National Park  located in the east. However, good birding can be found across the country and even close to Kigali, so no matter how long you are staying there is rewarding birding on offer.

- Nyungwe National Park is a tropical montane rainforest that is home to 322 bird species as well as 13 species of primate and numerous endemic plant species. So far 29 are bird species have been found here. The star attraction is undoubtedly the Red-collared Babbler and Rwanda is the only safe place to see this stunning bird. Other specialities include Rwenzori Turaco, Handsome Francolin, Rwenzori Nightjar, Grauer’s Warbler, Regal, Blue-headed and Purple Breasted Sunbirds, Grauer’s Swamp Warbler and Neumann’s Warbler. All of these and more can be seen easily from a well-maintained network of trails with the help of the park’s expert bird guides.

With more time and a bit of luck it is also possible to observe Kungwe Apalis, Kivu Ground Thrush and Willard’s Sooty Boubou. Possibly the rarest of Nyungwe’s birds would be the Congo Bay Owl, Albertine Owlet and Shelley’s Crimsonwing, Rockefeller’s Sunbird which have been reported, but are seldom seen. Night-walks will be available soon and these offer the potential to track down the park’s elusive nocturnal species.

- Akagera National Park is a savannah park with rolling hills, lakes, wetland and woodlands. It offers a more traditional African Big 5 safari experience, but the diversity of habitats mean it has excellent birding too. To date 490 bird species have been observed in Akagera NP. The park offers a comparable experience to others in the region, but its compact nature means you can access the different habitats easily and build a good bird list.

The range restricted Red-faced barbet is probably the most sought-after bird and should be easy to find around Akagera game Lodge and Muyumbu campsite. Other range restricted species and highlights include Northern Brown-throated Weaver; Papyrus Gonolek; White-Winged Swamp Warbler; Carruthers’s Cisticola, White-collared Oliveback, and Grey-crowned Cranes. Another desirable species is the Shoebill which is also seen in the park fairly regularly. The park is also home to good populations of raptors and large numbers of waterbirds.

A boat trip on Lake Ihema should give great views of many of the waterbird species and there is a good chance for African Finfoot, which is also seen regularly from the deck at the Ruzizi Tented Lodge. A night-drive offers the potential to observe the several nocturnal bird species such as Verreaux’s Eagle Owl and several Nightjar species.

- Volcanoes National Park is located in a region of mostly dormant, heavily vegetated volcanoes and includes Rwanda’s highest point, Mount Karisimbi. The park is famous for Mountain Gorillas, but also offers good birding potential and 200 bird species are known from this area, among these are 17 Albertine Rift Endemics. The species here are similar to Nyungwe, however, Scarlet-Tufted Sunbird is only found here in Rwanda and a trek to the summit of Mt Bisoke is your best bet for this bird. There are also a series of lakes surrounding VNP that can be worth a quick detour. Buhanga Eco-Park is also nearby and there have been sightings of African Pitta here during its migration.

- Gishwati-Mukura National Park is located in west Rwanda, in the mountains above Lake Kivu. This is Rwanda’s newest national park and currently the focus of extensive rehabilitation efforts. The forests hold good birdlife Gishwati, 232 species and Mukura 163 species including several Albertine Rift Endemics and forest specialists. Tourism options will be available soon, check back for details.

- Lake Kivu offers a very relaxing stop over during a birding tour and is not without its highlights. The lake supports huge numbers of White-breasted Cormorants, Pied Kingfishers and Osprey can be seen fishing during its migration. The lake shores are home to some of Rwanda’s more common terrestrial species and hotel gardens in Karongi, Rubavu and Rusizi can offer interesting birding. Double-tooth Barbet is regularly seen in this region along with species such as Yellow-bellied Waxbill, Familiar Chat, Brown-throated Wattle-eye and Spot-flanked Barbet. The area around Kinunu also offers good birdwatching for the more common species.

- Wetlands: Elsewhere, Rwanda’s wetlands and marshes cover around 10% of the country. Rugezi, Akanyaru Wetlands and Nyabarongo Wetlands have been declared Important Bird Areas by Birdlife International.

Rugezi Marsh, located in north west Rwanda near Gicumbi, is Rwanda’s only RAMSAR Site and is home to good populations of Grauer’s Swamp Warbler and also supports Grey-crowned Cranes, Papyrus Canary and there have been reports of Papyrus Yellow Warbler from here. At the south end of the marsh there is an area of open water called Lake Nyagafunzo, a boat ride here is great for seeing some of the more common waterbirds in the country and the possibility of White-backed Duck and Lesser Jacana.

The wetlands and lakes of Bugesera District to the south-east of Kigali offer excellent birding and are probably some of the most easily accessible birding areas in Rwanda. There is a diversity of habitats and some 415 bird species have been recorded in this region. Several sites offer good chances to observe Papyrus Gonolek, Papyrus Canary, White-winged Swamp Warbler, White-collared Oliveback, Lesser Jacana, and White-backed Duck. The latter two species were rediscovered in Rwanda in 2014 after a long period with no confirmed sightings. In addition, Red-chested Sunbird, Palm Nut Vulture, Blue-naped Mousebird, African Fish Eagle, numerous waterbirds and savannah species can be seen in this area.

- Kigali has great Urban Birding, hotel gardens often hold interesting bird species and Nyarutarama Lake or “Lover’s Lake” at the edge of the Kigali golf course is always productive. Even those with a few spare hours will be rewarded by a visit. Species include: White-collared Oliveback, African Swamphen, Grey-headed Bushshrike, Bat Hawk, Narina Trogon, Lesser Honeyguide, Brown-backed Honeybird, Black Cuckoo-Shrike, Olive-bellied, Red-chested Sunbird and Bronzy Sunbirds, African Goshawk, Palm Nut Vulture, Crested Barbet, Grey-backed Fiscal, Rüppell’s Starling and Black-headed Weaver. In addition, Umusambi Village (due to open mid-2019) will offer close up views of rescued Grey-crowned Cranes and to date around 100 species have been seen in the restored habitat. The Rwanda Environment Management Authority is also developing a park at the edge of Kigali, when completed this will be a good place for urban birding. Furthermore, there are further good sites at wetlands at the edge of the city.