Mountaineering in Uganda and Rwanda 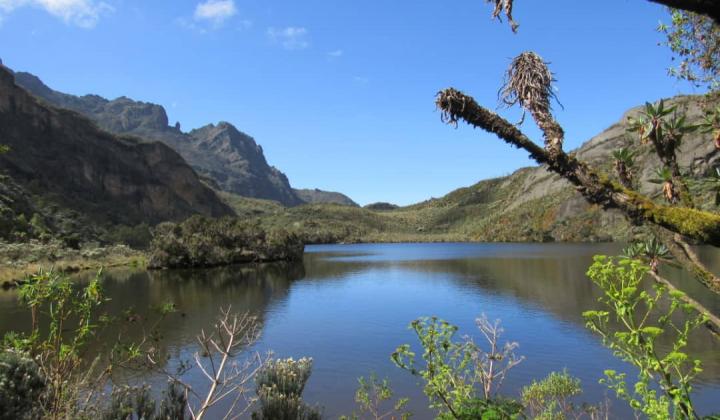 Mountaineering - Africa's highest mountains are in East Africa!
Almost hundred percent of all mountaineering interest in Africa can be found in East Africa: the three most important massifs rising above the East African savannah are:  The Kilimanjaro (5895m), highest point on the continent; Mt. Kenya (5199m), lower but offering much more mountaineering challenge; and the Rwenzori mountain Range (5109m) on the Uganda-Congo border, the legendary Mountains of the Moon probably the most difficult of the three.

Mountaineering is the art of moving about safely in mountain regions, avoiding or overcoming the hazards incidental to them, and attaining high points with typically difficult access.

Uganda has 2 major challenges for mountaineers:

- The challenging Rwenzori (5109m) has six peaks, each capped with permanent snow, and three with glaciers. The highest mountain in the range is Mt Margherita. The Park reopened its mountaineering activities in 2001 after it was closed for security reasons. The climb takes 8 days.

- The Mount Elgon is a solitary extinct volcano straddling the border between Uganda and Kenya, 100 km north-east of Lake Victoria. Wagagai, the highest peak, lies in Uganda and is 4321m. Despite its height, the average slope angle of Mount Elgon is less than 4 degrees. The climb takes 6 days.

Uganda Wildlife Authority staff went in August 2004 to Italy to have a 3 weeks training course in the Alps. The rangers are using their newly acquired skills to enhance the mountaineering experience for tourists. This initiative is important and will boost the mountaineering activities in Uganda.

For Rwanda mountaineers should consider the climb of the Bisoke (3.711 m) as a day excursion or the beautiful Karisimbi volcano with an altitude of 4.507 m. It's the highest of the eight major volcanoes of the Virunga field, on the western branch of the East African rift valley (Albertine Rift).