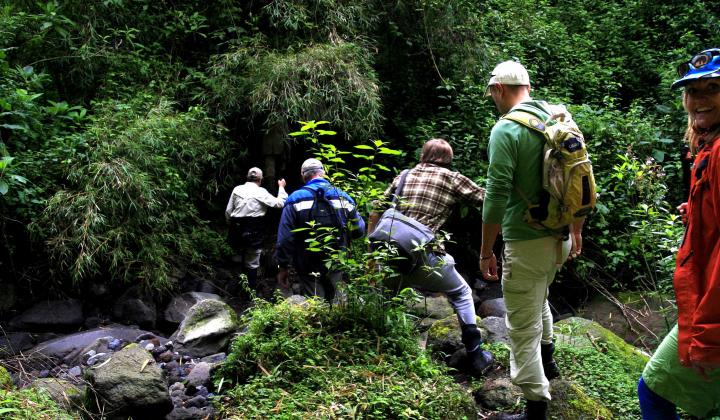 “In the heart of Central Africa, so high up that you shiver more than you sweat,” wrote the eminent primatologist Dian Fossey, “are great, old volcanoes towering almost 15,000 feet, and nearly covered with rich, green rainforest – the Virungas.”

Gazetted in 1925, Volcanoes is the oldest national park in Africa The park was named after the chain of dormant volcanoes: Karisimbi the highest at 4,507m, Bisoke with its verdant Crater Lake, Sabyinyo, Gahinga and Muhabura.

High variety in vegetation due to the large altitudinal range:

There are a number of elephants in the park, but these are very rarely seen.

There are 200 recorded bird species, with at least 13 species and 16 subspecies endemic to the Virunga and Rwenzori Mountains.

Most of travelers come into Rwanda for gorilla safaris and other Rwanda wildlife tours. Volcanoes NP is Rwanda’s most visited tour.

The most popular activity to do in Volcanoes national park is Mountain gorilla tracking.

This is a priority for most travelers to Volcanoes national park. Tracking gorillas in Rwanda is safe and relatively accessible.

Age limit for Gorilla trekking: You need to be 15 years old.

The national park is a home to 10 habituated gorilla families which are fully habituated, with a few others habituated solely for scientific research.

The groups, or troops, consist of at least one silverback along with several females and youngsters.Eight tracking permits are issued per troop per day, meaning the encounter is as intimate and as unobtrusive as possible. The 10 fully habituated are:

Visitors report at the Park headquarters at 7am, and are allocated a family group on the day according to fitness levels. They are also briefed on protocols and rules for visiting the gorillas.

Hikes up to their various locations can last anything from 30 minutes to four or more hours, reaching an altitude of between 2,500m and 4,000m. For a small fee, you can hire a porter to accompany you on the trek, to help carry your backpack and offer a hand during tricky parts of the hike. Even if you don’t really need them, hiring a porter is a helpful way to contribute directly to the local economy.

Travelers with low fitness or disabilities have an alternative of using a bamboo stretcher (kind of sedan chair). These stretchers are made of bamboo trees, the common tree species in gorilla habits. As with sedan chairs, a traveller sits in these stretchers and four porters carry him/her to and from seeing mountain gorillas

Since the initiation of gorilla tourism, these services have always been offered.

- Golden Monkey trekking: These little-known primates, Cercopithecus kandti, are a subspecies of the Blue Monkey.

You might not get as close to the golden monkeys as you may to the gorillas, but their antics are fun to watch and the bamboo forests, which they inhabit, are an interesting environment.

These fast-moving little creatures live in social groups of up to 100 individuals and they are very entertaining as they constantly swing through the bamboo tree or chase each other in circles all around you.

- There are two groups of habituated golden monkeys.
- Number of visitors per group of Golden Monkeys: maximum of 8 people, accompanied by your trekking guide and an armed park ranger.
- Age limit: Same as for Gorilla trekking: 15 years.

- Hiking to the tomb of Dian Fossey and the former Karisoke Research Center:

For those interested in tracing the footsteps of Dian Fossey, her tomb is a 30-minute drive from the park h/q and then 2 or 3 hours hike through the forest, to above 3,000m altitude.

- Caving and sightseeing: (Outside Volcanoes NP)

- Excursion to the Twin Lakes
- Visiting the Musanze caves.

In 2021 Volcanoes National Park will realize a new milestone in Gorilla conservation with the opening of the new "Ellen Degeneres campus of the Dian Fossey Gorilla Fund". "The Ellen Fund" is supporting The Fossey Fund to create a campus that will support : the longterm health and care of the Dian Fossey Fund,  gorilla science, responsible tourism, and the needs of the local population. This campus will enhance the gorilla conservation efforts and the work started by Dian Fossey in 1967.

The campus is the new home for the Karisoke Research Centre and aims to inspire tourists, scientists, government partners, students and community members toward a lifetime of gorilla conservation.