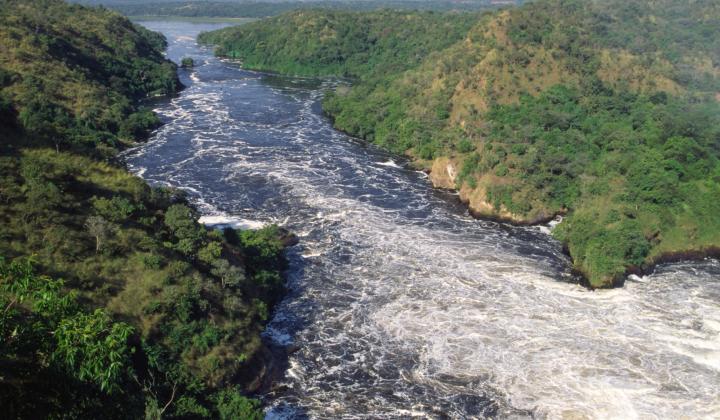 Murchison Falls National Park lies at the northern end of the Albertine Rift Valley, where the sweeping Bunyoro escarpment tumbles into vast, palm-dotted savanna. First gazetted as a game reserve in 1926, it is Uganda's largest and oldest conservation area, hosting more than 70 species of mammals and over 400 birds.

In 1952, it became Uganda’s first national park. Murchison Falls is one of the most visited national parks in the country. The most popular view are the falls where the Nile squeezes through an 8m wide gorge and plunges with a thunderous roar into the "Devil's Cauldron".

The park is bisected by the Victoria Nile, which plunges 45m over the remnant rift valley wall, creating the dramatic Murchison Falls, the centerpiece of the park and the final event in an 80km stretch of rapids. The mighty cascade drains the last of the river's energy, transforming it into a broad, placid stream that flows quietly across the rift valley floor into Lake Albert. This stretch of river provides one of Uganda's most remarkable wildlife spectacles. Regular visitors to the riverbanks include elephants, giraffes and buffaloes; while hippos, Nile crocodiles and aquatic birds are permanent residents.

In 1983, both black and white rhinos were declared extinct in Uganda. The Rhino Fund Uganda, a non-governmental organization set up in 1997 to repopulate Uganda with wild rhinos through a breeding and release program.

The Ziwa Rhino Sanctuary – a privately owned ranch comprising of savannah and woodland was leased to the Rhino Fund for the sole purpose of breeding rhinos. It was here that the first six southern white rhinos were translocated in 2005. This is quite an exotic breed since Uganda only had northern white rhinos.

From these first 6, the rhino population is at slightly over 30 now.

When you visit the sanctuary, you make a valuable contribution in the conservation of these animals. For those travelling to Murchison Falls NP, a visit to the sanctuary makes for much needed break in the journey.

Located within the boundaries of Murchison Falls National Park, Budongo Central Forest Reserve is a tropical rainforest managed by the National Forestry Authority (NFA). Officially gazetted in 1932, the forest was protected by the King of Bunyoro and only with his permission could local chiefs hunt inside the forest. The name Budongo derives from the local Bunyoro word ‘fertile soil’.

Rich in biodiversity, Budongo is home to mammals, primates including chimpanzees, and butterflies. Some of the chimpanzees have been habituated for tourism purposes allowing visitors the unique opportunity to view these amazing apes in their natural environment. Trails have been developed for tourists to have activities such as forest walks, chimp trekking and birding.

Find out more about the conservation challenges (Video)

There are 3 designated game drive areas in Murchison Falls NP:  the Delta area, the Buligi Peninsula and the southern sector. The Buligi Peninsula is the ideal area for game viewing, there is plenty of game such as elephants, giraffes and on a good day, you may see the elusive lion and leopard.

The southern part of the park is mainly covered by forest. Lately though, there is a good amount of the Uganda kob and this has made it a prime hunting spot for lions. In 2016, giraffes were translocated to this part of the park.

A new addition in the park!

Operated twice a day, the hot air balloon safari gives you an aerial view of this immense savannah park. Up in the sky also means that you have a vantage viewing point and your pilot will point any special sights as you glide through the sky. If you opt for the sunrise safari, the beauty of the sunrise alone complements this tour. The hot air balloon is operated by licensed pilots and your safety is priority.

At the end of the sunrise balloon safari, you may have breakfast right in the wilderness and then continue to a game drive.

- Boat cruise to the falls

The boat trip upstream towards the falls taking three hours reveals an astonishing an amazing display of wildlife and birdlife and ends with the impressive front view of the majestic falls. This is where the Nile explodes through a narrow gorge and cascades down to become a placid river. You can admire on the slopes of the Nile river, the big number of hippos, elephants and the Nile crocodiles. The launch trip is a unique adventure, full of activity and constant surprises!

Sport Fishing at Murchison Falls National Park is generally conducted in the area at the base of the falls (Paraa).  The fishing is either from the rocks on the bank of the river or slightly lower down stream in the pools from a boat.  You will catch different species such as Nile Perch, Cat fish, Tiger fish. Another excellent location is Chobe.  Historically Chobe Safari Lodge’s reputation was based on the location being a haven to the global angler. Following an era of the site being totally undisturbed, this part of the river once again offers a challenge to the sporting angler.

Fishing at Murchison requires expert assistance, to ensure both client safety in this adventurous destination, and the best opportunity for successful fishing. There are experienced guides to take you to the best spots.

- Hike to/Visit the top of the falls

There are two ways to visit the top of the falls: by car or hike. The more thrilling option would be the hike. For this option, you will disembark from the trip and take the steep but very rewarding hike to the top.

While hiking, enjoy the cool breeze, spectacular views and sprays as the water crashes through the narrow gorge to become the formidable Murchison Falls.

The Victoria Nile Delta is a peaceful stretch where the River Nile flows into Lake Albert and it is here that the park’s prime wildlife is explored by boat. You will have an opportunity to view large numbers of hippos and Nile crocodiles as well as various bird species some of which are endemic to this region. A private boat trip will give nature-lovers, birdwatchers and photographers the most rewarding experience.

Find out more about the story of relocation of 19 Rothschild's giraffes to the South bank of Murchison. 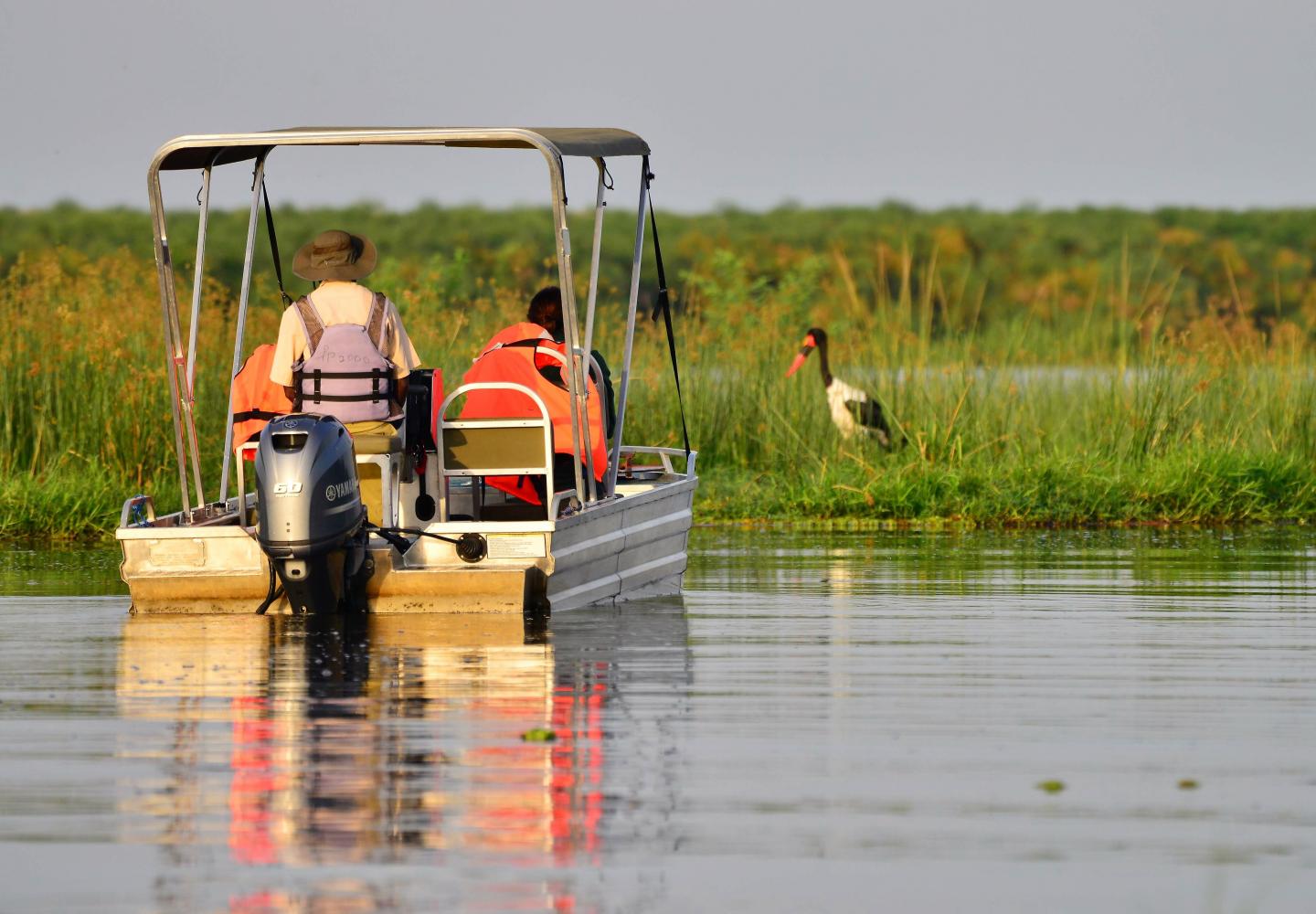 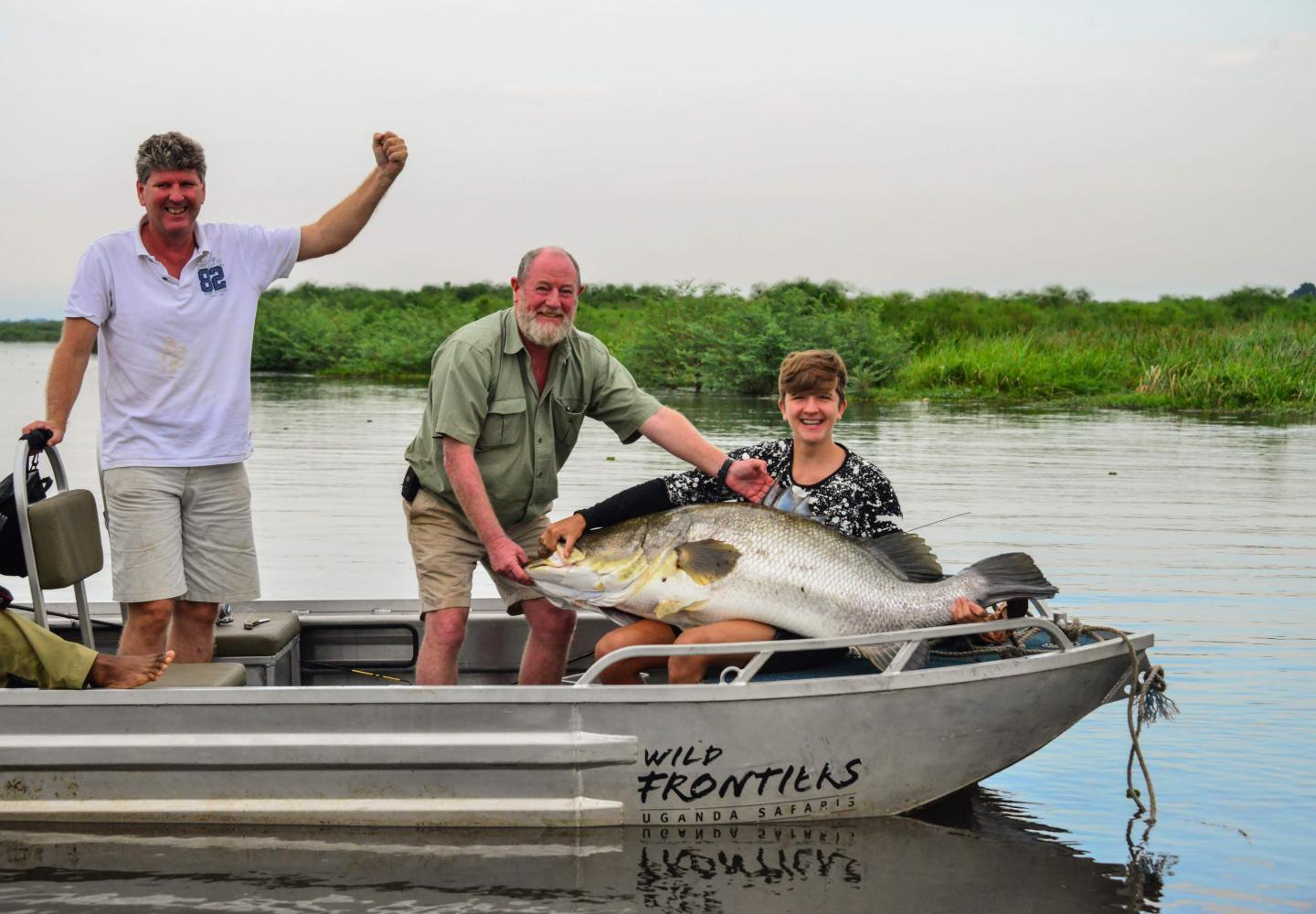 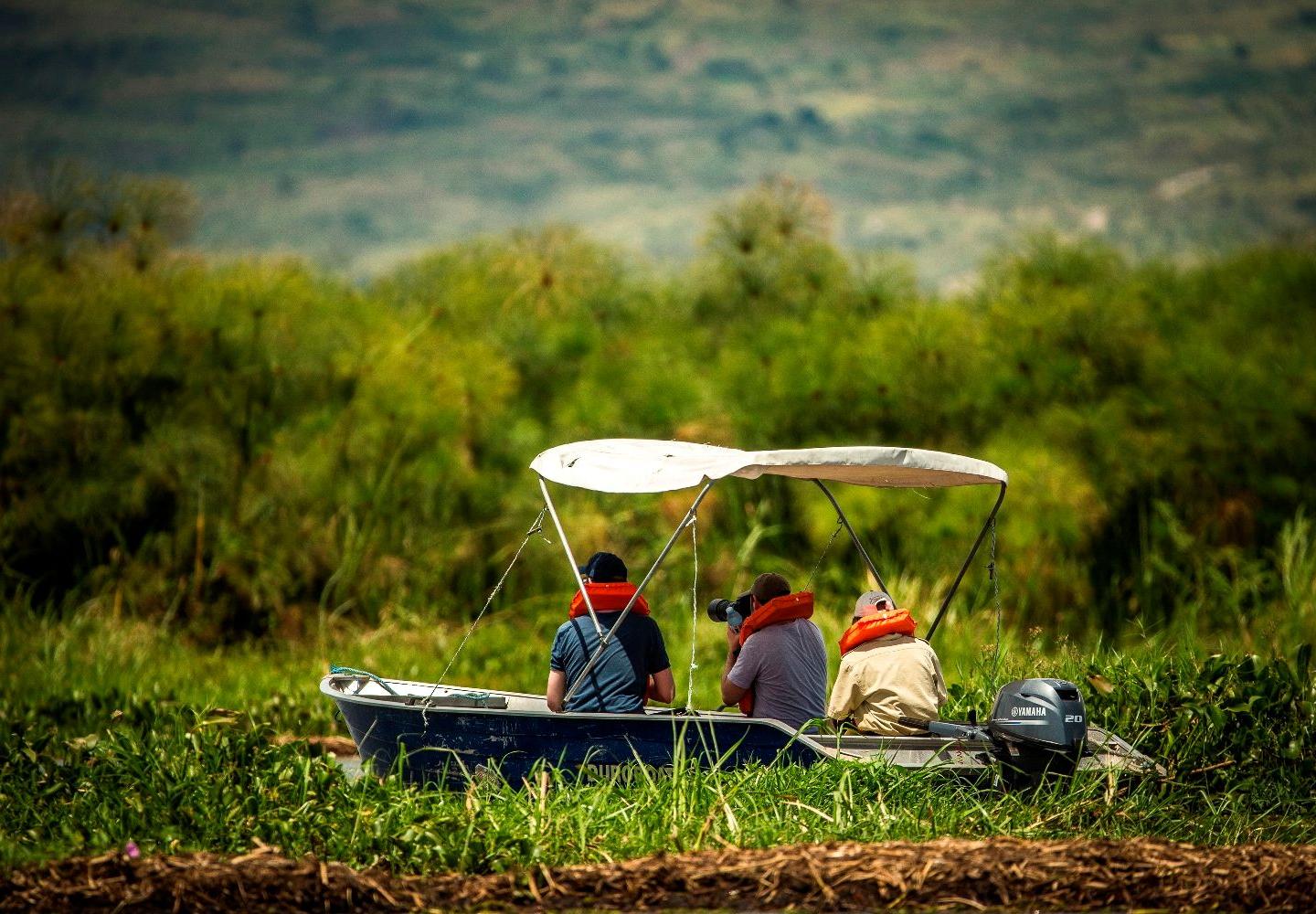 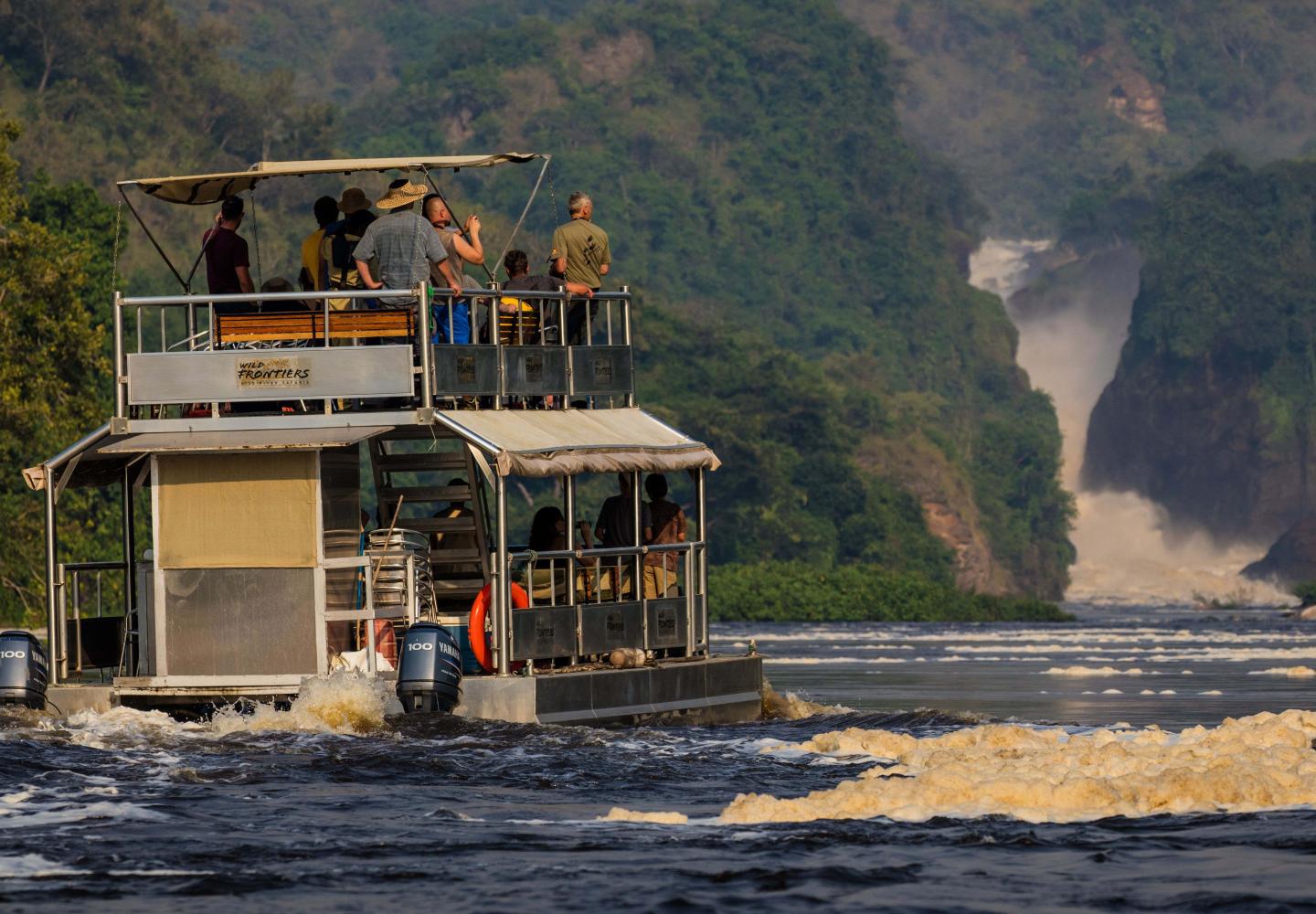