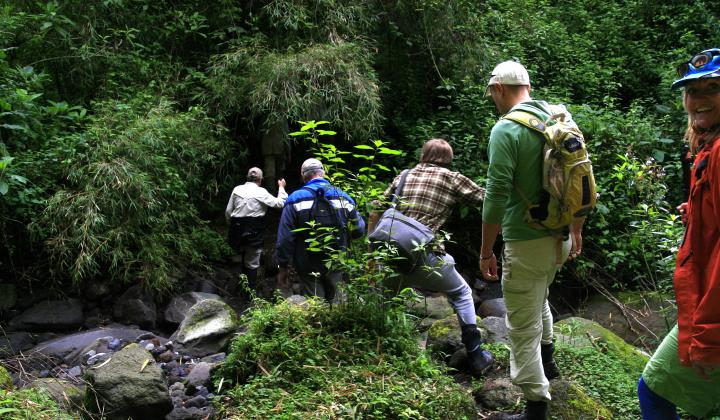 This is the smallest national park in Uganda, declared as a game sanctuary in 1930 and gazetted into a national park. It is located at an altitude of between 2,227 m and 4,127 m.

The name is derived from its locations. Mgahinga refers to the local word for a pile of volcanic stones at the foot of the volcanoes. Mgahinga Gorilla NP forms part of the Virunga Conservation Area. The 3 extinct volcanoes along the border regions of Uganda, DR of Congo and Rwanda form a breathtaking and scenic backdrop to this park.

Domestic flights are available: Entebbe to Kisoro (Daily & morning only)

Activities & Special Interest:
- Gorilla trekking: The park has only one habituated gorilla group. The gorilla trekking experience is completly different than the Bwindi Experience. The Mgahinga volcanoe is part of the virunga chain of Volcanoes and  offers the same experience as Rwanda. For more information about the Virunga Gorilla Experience.

- Golden Monkey tracking:
Mgahinga National Park offers the chance to track the golden monkeys. Endemic to the Albertine Rift, the golden monkey is characterized as a bright orange-gold body, cheeks and tail, contrasting with its black limbs, crown and tail end.

- Hike Sabyinyo: Mount Sabyinyo, among the chain of the eight Virunga volcanoes offers exceptional hiking experience. Being a dormant volcano, it poses no threat to the hikers or the people around it. Sabyinyo means old man’s teeth in reference to its jagged summit dissected by deep gorges and ravines
Unlike other volcanoes that either on the border line or in one of the three countries, Mountain Sabyinyo is at the point where the three Virunga countries meet, Uganda, Rwanda, and the DRC. Talk about being in three countries at the same time with one visa.

- Hike Mount Muhabura: At 4,127m this is the 3rd highest of the peaks in Mgahinga Gorilla National Park. The name means guide.
Mount Muhabura is the most difficult mountain to hike among the 8 volcanoes in the Virunga Ranges. It may not be the tallest but it is very steep and yet one is required to complete the hike in one day (before the sun sets). To reach the summit and descend on time, one needs to be mentally prepared and maybe a little stubborn.

- Batwa Trail: This park holds a very huge cultural significance to the indigenous Batwa who were residents of the forest before they were moved out for conservation purposes.

Mgahinga Gorilla NP forms part of the Virunga Conservation Area. The 3 extinct volcanoes along the border regions of Uganda, DR of Congo and Rwanda form a breathtaking and scenic backdrop to this park.